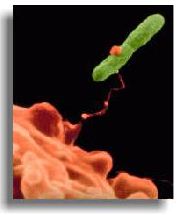 Legionella Pneumophila is a Gram-negative bacterium that is widely distributed in natural and manmade freshwater habitats. All members of the genus have small, rod-shaped cells 1-2 µm in length and 0.5 µm wide and require iron and cysteine for isolation. They will initiate growth on artificial media only over a narrow pH range of 6.8-7.0 but can tolerate a pH range from 5.5-9.0 in natural habitats.

Legionella Pneumophila was identified in 1979 following an outbreak of ‘Legionnaire’s Disease’ caused by the bacterium. It was later learned that previous outbreaks of Legionnaire’s disease had occurred as early as 1957. Legionella Pneumophila was isolated in 1947 in a guinea pig that had been inoculated with blood from a patient with an unknown disease.

The first identified outbreak of Legionnaires Disease occurred during a Pennsylvania State Convention of the American Legion in 1976. 182 cases resulted in 29 deaths within the hotel. 38 cases were reported amongst passers by, resulting in a further 5 deaths. In recent years 200 – 300 cases of the disease have been reported each year in England and Wales. The majority of outbreaks are associated with buildings such as; Hotels, Factories, Hospitals, Nursing Homes and Office Blocks.

More research has been carried out in the United States where, according to the OSHA (Occupational Safety and Health Administration – part of the U.S. department of Labour), Legionnaire’s disease is considered to be fairly common and serious, and the Legionella organism is one of the top three causes of sporadic, community-acquired pneumonia.

Because it is difficult to distinguish this disease from other forms of pneumonia, many cases go unreported. Approximately 1,000 cases are reported annually to the CDC (Centre for Disease Control and Prevention), but it is estimated that over 25,000 cases of the illness occur each year and cause more than 4,000 deaths.

This is in excess of 25 times the number of reported cases, which would indicate that some 5000 – 7500 cases in England and Wales is, perhaps, a more accurate figure. There are sources in the UK that believe the true problem attributable to all of the 20+ different varieties of Legionella linked with human diseases, could be significantly higher than this.

In the UK 180,000 people die from all of the different varieties of pneumonia each year. As many cases apply to people in susceptible groups (such as the elderly, smokers, alcoholics, cancer sufferers and other immuno-suppressed patients) rarely is a full investigation of the true cause of the pneumonia carried out.

How do people contract Legionella? The most popular theory is that the organism is aerosolised in water and people inhale the droplets containing Legionella. However, new evidence suggests that there is another way of contracting Legionella. It appears that “aspiration” may be the way the bacterium enters into the lungs. Aspiration means choking such that secretions in the mouth get past the choking reflexes and instead of going into the oesophagus and stomach, mistakenly, enter the lung.

We use cookies on our website to give you the most relevant experience by remembering your preferences and repeat visits. By clicking “Accept”, you consent to the use of ALL the cookies.
Cookie settingsACCEPT
Manage consent

This website uses cookies to improve your experience while you navigate through the website. Out of these, the cookies that are categorized as necessary are stored on your browser as they are essential for the working of basic functionalities of the website. We also use third-party cookies that help us analyze and understand how you use this website. These cookies will be stored in your browser only with your consent. You also have the option to opt-out of these cookies. But opting out of some of these cookies may affect your browsing experience.
Necessary Always Enabled
Necessary cookies are absolutely essential for the website to function properly. This category only includes cookies that ensures basic functionalities and security features of the website. These cookies do not store any personal information.
Non-necessary
Any cookies that may not be particularly necessary for the website to function and is used specifically to collect user personal data via analytics, ads, other embedded contents are termed as non-necessary cookies. It is mandatory to procure user consent prior to running these cookies on your website.
SAVE & ACCEPT